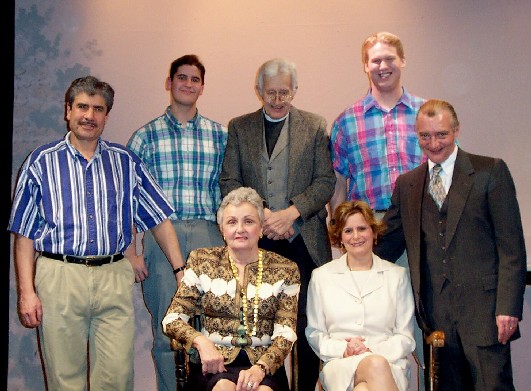 The Old Boy was a success, almost selling out its opening weekend.  Audiences were impressed with the production, as was the small group who saw it at the Auditorium at Nichols College in Dudley, where the show was taken on Monday, January 27.  (Rick Woods combined his vocation and avocation, and one of the Nichols staff commented that it was good for the students to get some culture other than movies.)
As some may already know, Marj Lucier was forced to miss the two final performances due to illness. Marilyn Wales, stage manager and lights operator, stood in for her (as well as at the Nichols production) and did a fantastic job.  David Henshaw filled in at the board for the performances.
Two proofs it was definitely a success:  Rick announced at the cast party that he would definitely like to try it again.  And newcomer Joel was inquiring about auditions for the Christie; another associate. Welcome.
Rick Woods directs this drama in which Sam, a well-known politician from a distinguished family returns to his Alma Mater, a posh New England prep school, to deliver the commencement address.  News of the death of an old friend forces him to explore his past and the choices he must now make.  Provocative and touching.
See Photos