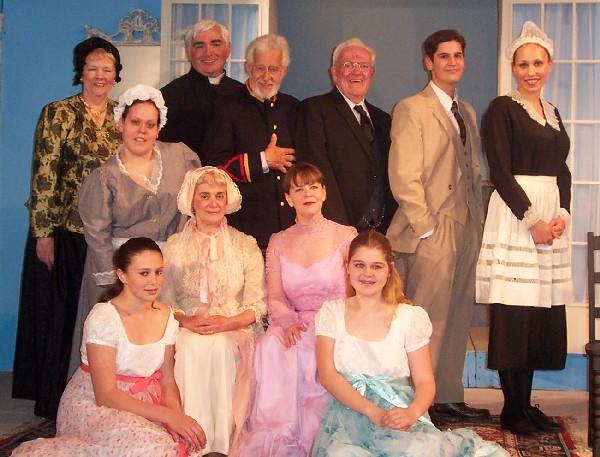 Directed by Miriam Lehto
General St. Pé resists growing old. He desires to maintain his reputation as a dashing lover and soldier, but does not want to hurt his invalid wife. He dreams of his bygone affairs of love and honor as he tries to write his military memoirs, while his querulous, bedridden wife continually shouts at him from her room – accusing him of unfaithful-ness, in mind if not in body.
Waltz was well received by our audiences; over half the performances were sold out, and an extra performance was sold to the Fitchburg State College Upward Bound program!

Opening night was doubly important for Janet Cragin, as it was also opening night for her first grand-child. The production brought several familiar faces back onstage, as well as Jessie Miller, who made the mistake of calling David Henshaw to see if there were theatres around she could audition for. It also brought to Stratton the talented Michele Gomperts, from Pepperell, a Bates sophomore looking for some summer theatre. She jumped right in, helped set lights and ran the board for performances. And it was Ari Lew’s fourth production of the season – from the mumbling French lover in Nude to the young man who gets the girl.